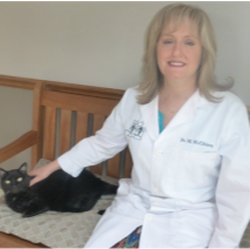 A 1991 graduate of the University of Pennsylvania School of Veterinary Medicine, Dr. McElhinny is the owner of Green Valley Veterinary Hospital. She has practiced at Green Valley (formally Kaufman Veterinary Clinic) since her graduation and in 2007 expanded her role to practice owner.

Dr. McElhinny enjoys the medical and surgical variety provided by general practice and continually strives to be on the cutting edge of veterinary medicine by keeping her hospital supplied with the latest technology. In addition, she is a firm advocate of her team members upgrading their skills and knowledge through ongoing continuing education classes both locally and nationally. Her special interests include dermatology, endocrinology, preventive medicine, and senior pet care. 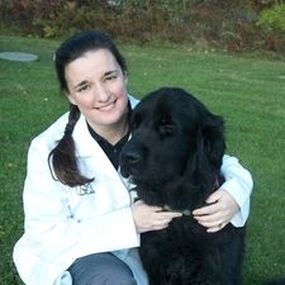 A native of Beaver County, Dr. Burton-Hall graduated from Riverside High School and obtained a Bachelor of Science degree in biology with a minor in chemistry from Geneva College in Beaver Falls. In 2003, she received her veterinary doctorate from the University of Pennsylvania in Philadelphia.

After veterinary school she returned to Green Valley Veterinary Hospital (then Kaufman Veterinary Clinic). She had originally started working for Dr. Kaufman as a kennel attendant in 1994. She continued to work as a veterinary assistant during college and summers in between veterinary classes.

​She enjoys the rural area with her husband George, daughters and son, three cats named Thor, Loki, and Flint, a Newfoundland, Sidney and a Labrador Retriever, Oakley. She also likes to garden and camp in her free time. 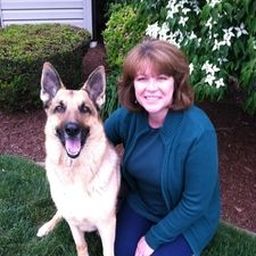 After receiving her bachelor of science degree in biology from Ohio University, Laure joined the Kaufman Veterinary Team in 1981. Twenty-six years later, she saw the transition to Green Valley Veterinary Hospital where she became the practice manager in 2007. Enjoying her long time passion of helping animals, she brings many years of experience to the veterinary field.   You may still find her involved with all aspects of the hospital, but is currently more involved with management.

​She resides with her husband Joe and best friend, a German Shepherd Dog, Gunner. 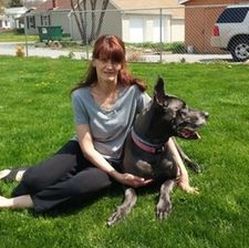 Renee joined Kaufman Veterinary Clinic in 2002 and has had the pleasure to experience the transition to Green Valley Veterinary Hospital.  Years of cross training has allowed her to enjoy all aspects of client service from receptionist to assisting in surgery.

Renee is responsible for all of the pet friendly and seasonal decor in the hospital. We wish that we could contract her out to decorate for all of our homes as well! 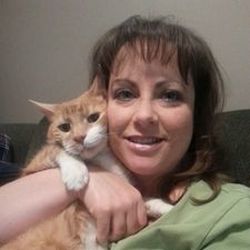 Kristie joined Kaufman Veterinary Clinic in 1992 after completing the Veterinary Assistant program at the Median School (now known as The Vet Tech Institute) in Pittsburgh.  She witnessed the transition to Green Valley Veterinary Hospital in 2007 and feels honored to be one of the senior technicians in the practice.

​She is the proud mother of twin daughters.   Kristie enjoys the hands-on aspect of her job and the personal relationships she is able to form with the clients.

Amy graduated from Sanford Brown Institute, formerly known as Western School of Health and Business in February 2004. After graduation, she began working as a technician for Kaufman Veterinary Clinic and has seen the transition to Green Valley Veterinary Hospital. Amy enjoys nourishing the human-animal bond and meeting all the hospital's furry friends and their owners.

​When she is not at the hospital, she enjoys spending time with her husband, young daughter and son, and horse. 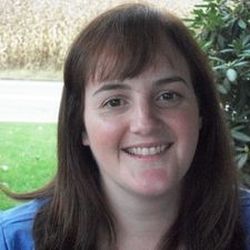 After obtaining a bachelor of science in environmental science from Penn State University, Missy realized her true calling was in veterinary medicine. She spent two years in New York City at a rehabilitation center performing massage and hydrotherapy on dogs before returning to the area.

​She obtained her veterinary technical degree from The Vet Tech Institute and became a licensed technician in January of 2005.  Missy joined Green Valley's team in August of 2008 and has been a full-time member since January 2010.  She lives with her husband Eric , son Josh, and her crazy cats Rudy and Kevin. 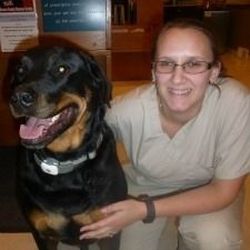 Katie is a graduate from Sandford Brown Institute in Pittsburgh, PA. She joined our team in August of 2014. Katie is very excited to continue to grow and learn in her career with the team here at Green Valley Veterinary Hospital.

​She resides in Freedom with her husband Colton, son and two daughters. They also have one fur baby: Pixie the Husky. Working with animals is a lifelong dream that has become a reality. 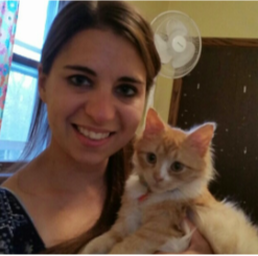 Danielle graduated from Edinboro University of Pennsylvania in 2008 with a Bachelor of Science in Health and Physical Education.  She then moved into the Pittsburgh area and worked in human Radiology.  After deciding she wanted to work more with animals, Danielle returned to school at the Vet Tech Institute and graduated in July 2014.  She joined the the team at Green Valley Veterinary Hospital in February 2015.  She enjoys every aspect of the hospital from meeting new puppies and kittens, establishing relationships with clients and assisting in surgery.  Her special career interests include surgery, research, and radiology. 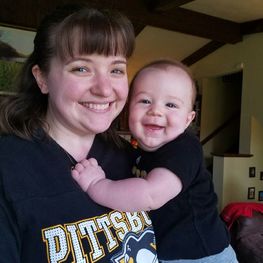 Allison joined our team in March of 2017. Allison graduated from the Vet Tech Institute in 2006. She has worked in the veterinary field for 11 years and her passion for caring for animals keeps growing stronger.  She enjoys educating clients about their animal companions and assisting in surgeries and dental procedures.  She is very excited for the opportunity to further her career and education here at GVVH.

Her personal interests are crocheting, crafts, spending time with her husband Dave and her son David Robert. She also enjoys hanging out with her friends and their families. Her fur babies include their two cats, Almond Joy (AJ) and Simba. 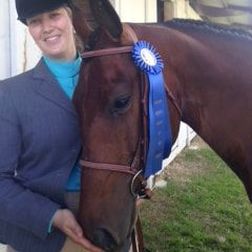 Heather graduated from the Vet Tech Institute of Pittsburgh in 2015 and fulfilled an externship with us here at Green Valley. Heather accepted a position from us to join our team initially, but then followed her true passion to care for large animals like horses and cows. We were lucky to have the opportunity to welcome her back to our team in June of 2017.

Heather has a large furry family at home with her husband consisting of her horse Zippy, her two dogs River and Kimber, and her cat Walnut. 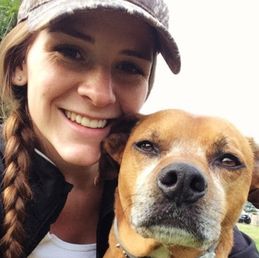 Allison (Alli) graduated from the Vet Tech Institute of Pittsburgh in 2015. She joined Green Valley Veterinary Hospital in April 2018 after passing her state board examination, earning herself the title of Certified Veterinary Technician!

Alli loves outdoor activities including fishing, kayaking, and camping. She is also a huge Pittsburgh sports fan and especially enjoys watching Steelers football. At home, she has a ten-year-old Boxer mix named Tyson and a German Shepherd Dog named LuLu. 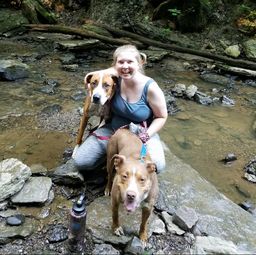 Molly has always had a passion for animals but it was through her work at Hiram College is when she discovered that animal care was her true passion.

In her free time, Molly enjoys reading, hiking with her husband and dogs Caesar and Merlin, and relaxing at home with her cat Ted.

Crysta graduated from the Vet Tech Institute of Pittsburgh and joined the team after completing her externship with us here at Green Valley in December of 2013. Her special interest in educating pet owners and a bit of a creative side combined to launch her into the wild world of social media management and she has been our online voice for the last several years. Her other interests include anesthesia, maintenance/troubleshooting, and technology/computer skills.

In an attempt to broaden her field of knowledge and experience in the veterinary field, Crysta left GVVH in the summer of 2018 only to quickly return after realizing that Green Valley was her home. She missed her favorite clients, patients, and all of her coworkers and feels fortunate to have been welcomed back!

When away from work, Crysta enjoys spending time with her family and her pets: four cats named Crow, Bridget, Strudel, and Trevor as well as two dogs named Bailey and Fleury!
Stephanie decided after four years as a Pharmacy Technician that she wanted to switch her focus to veterinary medicine; she had always dreamt of becoming a veterinarian when she was a young child.

Stephanie started her veterinary career at another practice in August of 2016 as a Veterinary Technician and started here with us at Green Valley in January of 2019.

In Steph's free time she loves spending time doing outdoors sports and activities as well as caring for her two pets: a Portuguese Water Dog named Daisy and a Cockapoo named Molly. She also has a bit of an infatuation with ducks! While she doesn't currently have any ducks, she has been a proud duck mom and thinks that they are one of the cutest animals!
Coming soon!